As research becomes more influential in educational practice, it becomes important that studies take place in all kinds of schools. However, this does not happen. In particular, the large-scale quantitative research evaluating practical solutions for schools tends to take place in large, urban districts near major research universities. Sometimes they take place in large, suburban districts near major research universities. This is not terribly surprising, because in order to meet the highest standards of the What Works Clearinghouse or Evidence for ESSA, a study of a school-level program will need 40 to 50 schools willing to be assigned at random to either use a new program or to serve as a control group.

Naturally, researchers want to have to deal with a small number of districts (to avoid having to deal with many different district-level rules and leaders), so they try to sign up districts in which they might find 40 or 50 schools willing to participate, or perhaps split between two or three districts at most. But there are not that many districts with that number of schools. Further, researchers do not want to spend their time or money flying around to visit schools, so they usually try to find schools close to home.

As a result of these dynamics, of course, it is easy to predict where high-quality quantitative research on innovative programs is not going to take place very often. Small districts (even urban ones) can be hard to serve, but the main category of schools left out of big studies are ones in rural districts. This is not only unfair, but it deprives rural schools of a robust evidence base for practice. Also, it can be a good thing for schools and districts anywhere to participate in research. Typically, schools are paired and assigned at random to treatment or control groups. Treatment groups get the treatment, and control schools usually get some incentive, such as money, or an opportunity to use the innovative treatment a year after the experiment is over. So why should some places get all this attention and opportunity, while others complain that they never get to participate and that there are few programs evaluated in districts like theirs?

I have a solution to propose for this problem: A “Registry of Districts and Schools Seeking Research Opportunities.” The idea is that district leaders or principals could list information about themselves and the kinds of research they might be willing to host in their schools or districts. Researchers seeking district or school partners for proposals or funded projects could post invitations for participation. In this way, researchers could find out about districts they might never have otherwise considered, and district and school leaders could find out about research opportunities. Sort of like a dating site, but adapted to the interests of researchers and potential research partners (i.e., no photos would be required).

If this idea interests you, or if you would like to participate, please write to Susan Davis at sdavi168@jh.edu . If you wish, you can share any opinions and ideas about how such a registry might best accomplish its goals. If you represent a district or school and are interested in participating in research, tell us, and I’ll see what I can do.

If I get lots of encouragement, we might create such a directory and operate it on behalf of all districts, schools, and researchers, to benefit students. I’ll look forward to hearing from you!

Note: If you would like to subscribe to Robert Slavin’s weekly blogs, just send your email address to thebee@bestevidence.org.

The Center for Educational Policy recently released a report on how school districts are responding to the Every Student Succeeds Act (ESSA) requirement that schools seeking school improvement grants select programs that meet ESSA’s strong, moderate, or promising standards of evidence. Education Week ran a story on the CEP report.

The report noted that many states, districts, and schools are taking the evidence requirements seriously, and are looking at websites and consulting with researchers to help them identify programs that meet the standards. This is all to the good.

I find these concerns astounding. The same concerns were expressed when ESSA was first passed, in 2015. But that was almost four years ago. Since 2015, the What Works Clearinghouse has added information to help schools identify programs that meet the top two ESSA evidence categories, strong and moderate. Our own Evidence for ESSA, launched in February, 2017, has up-to-date information on virtually all PK-12 reading and math programs currently in dissemination. Among hundreds of programs examined, 113 meet ESSA standards for strong, moderate, or promising evidence of effectiveness. WWC, Evidence for ESSA, and other sources are available online at no cost. The contents of the entire Evidence for ESSA website were imported into Ohio’s own website on this topic, and dozens of states, perhaps all of them, have informed their districts and schools about these sources.

The idea that districts and schools could not find information on proven programs if they wanted to do so is difficult to believe, especially among schools eligible for school improvement grants. Such schools, and the districts in which they are located, write a lot of grant proposals for federal and state funding. The application forms for school improvement grants always explain the evidence requirements, because that is the law. Someone in every state involved with federal funding knows about the WWC and Evidence for ESSA websites. More than 90,000 unique users have used Evidence for ESSA, and more than 800 more sign on each week. 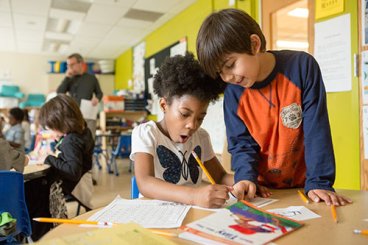 As to rural schools, it is true that many studies of educational programs have taken place in urban areas. However, 47 of the 113 programs qualified by Evidence for ESSA were validated in at least one rural study, or a study including a large enough rural sample to enable researchers to separately report program impacts for rural students. Also, almost all widely disseminated programs have been used in many rural schools. So rural districts and schools that care about evidence can find programs that have been evaluated in rural locations, or at least that were evaluated in urban or suburban schools but widely disseminated in rural schools.

Also, it is important to note that if a program was successfully evaluated only in urban or suburban schools, the program still meets the ESSA evidence standards. If no studies of a given outcome were done in rural locations, a rural school in need of better outcomes could, in effect, be asked to choose between a program proven to work somewhere and probably used in dissemination in rural schools, or they could choose a program not proven to work anywhere. Every school and district has to make the best choices for their kids, but if I were a rural superintendent or principal, I’d read up on proven programs, and then go visit some rural schools using that program nearby. Wouldn’t you?

I have no reason to suspect that the CEP survey is incorrect. There are many indications that district and school leaders often do feel that the ESSA evidence rules are too difficult to meet. So what is really going on?

My guess is that there are many district and school leaders who do not want to know about evidence on proven programs. For example, they may have longstanding, positive relationships with representatives of publishers or software developers, or they may be comfortable and happy with the materials and services they are already using, evidence-proven or not. If they do not have evidence of effectiveness that would pass muster with WWC or Evidence for ESSA, the publishers and software developers may push hard on state and district officials, put forward dubious claims for evidence (such as studies with no control groups), and do their best to get by in a system that increasingly demands evidence that they lack. In my experience, district and state officials often complain about having inadequate staff to review evidence of effectiveness, but their concern may be less often finding out what works as it is defending themselves from publishers, software developers, or current district or school users of programs, who maintain that they have been unfairly rated by WWC, Evidence for ESSA, or other reviews. State and district leaders who stand up to this pressure may have to spend a lot of time reviewing evidence or hearing arguments.

On the plus side, at the same time that publishers and software producers may be seeking recognition for their current products, many are also sponsoring evaluations of some of their products that they feel are mostly likely to perform well in rigorous evaluations. Some may be creating new programs that resemble programs that have met evidence standards. If the federal ESSA law continues to demand evidence for certain federal funding purposes, or even to expand this requirement to additional parts of federal grant-making, then over time the ESSA law will have its desired effect, rewarding the creation and evaluation of programs that do meet standards by making it easier to disseminate such programs. The difficulties the evidence movement is experiencing are likely to diminish over time as more proven programs appear, and as federal, state, district, and school leaders get comfortable with evidence.

Evidence-based reform was always going to be difficult, because of the amount of change it entails and the stakes involved. But sooner or later, it is the right thing to do, and leaders who insist on evidence will see increasing levels of learning among their students, at minimal cost beyond what they already spend on untested or ineffective approaches. Medicine went through a similar transition in 1962, when the U.S. Congress first required that medicines be rigorously evaluated for effectiveness and safety. At first, many leaders in the medical profession resisted the changes, but after a while, they came to insist on them. The key is political leadership willing to support the evidence requirement strongly and permanently, so that educators and vendors alike will see that the best way forward is to embrace evidence and make it work for kids.